When it comes to leading economic indicators they tend to fall into two camps: manufacturing and related measures, and then everything else. Here in Oregon we have two composite leading indicators series, one from our office and one from Tim Duy at the University of Oregon. Broadly speaking, each of these series is about 50-50 in terms goods-producing indicators, and broader economic measures. So when the oil bust and industrial production declines that began in late 2014 hit the data, there was certainly a scare, and a risk to the near-term economic outlook. The U.S. had never seen industrial production declines like that during an economic expansion. We have only seen declines like that during the middle of recessions. The fear was a goods-producing decline could pull the rest of the economy down with it, even as the rest of the indicators continued to flash green. Well, those fears have clearly faded into the rear view mirror. Not only has the manufacturing and goods-producing cycle revived, the near-term outlook continues to look very good.

First, let’s talk leading indicators. Note that the data that our office and Tim uses is a mix of Oregon and U.S. figures given data availability. That said, none of the individual indicators are flashing warning signs today. This is one reason why the near-term economic outlook remains bright. The consensus of forecasters pegs the probability of recession over the next year at just 13% based on the latest Wall Street Journal survey. As I’ve been saying in presentations lately, even if some of these numbers began to turn down tomorrow, it would take awhile before everything devolved into a full blown recession. The data flow is clearly healthy. 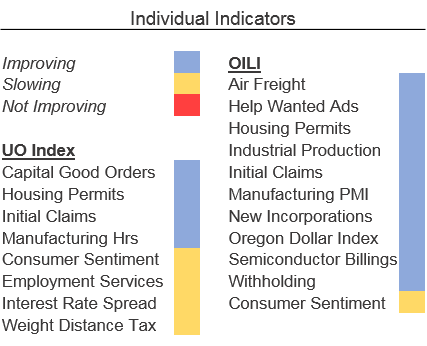 In terms of recent performance, we don’t have a lot of Oregon specific manufacturing numbers, outside of employment and wages. So one thing our office looks at is the mix of local industries relative to the U.S. Over the past couple of generations, Oregon’s more modern mix of manufacturing (more aerospace, metals, and semiconductors, less auto parts and textiles) has served us very well. This largely continues to to be the case today as seen in the chart below. The red Oregon lines takes the U.S. industrial production numbers by sectors and re-weights them based on local employment numbers. Over the past year, the Oregon mix of industries has seen better growth than the national mix. This, of course, represents the pulling out of the goods-producing malaise following the oil bust and manufacturing slowdown back in 2015. 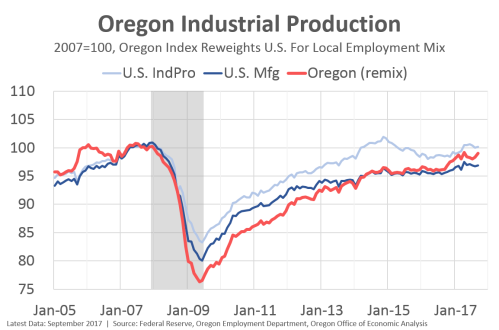 Right now the outlook is positive based on stronger domestic demand as the U.S. expansion continues, but also due to a better global economy as well. The International Monetary Fund just recently revised up their estimates for global GDP growth in 2017 and their outlook for 2018 and 2019. Left off the chart are emerging markets, which are growing faster (near 5%) but did not see a upward revision to the outlook. 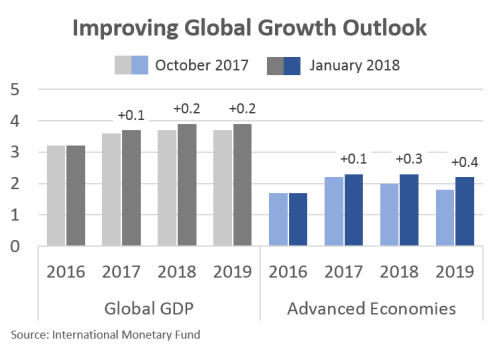 Additionally, the dollar has stopped appreciating, meaning Oregon-made and U.S.-made goods are becoming a bit less expensive to foreign buyers. This should help boost exports and goods-producing industries as well. Note that exchanges rates with Pacific Rim countries – where Oregon trades – aren’t showing quite the same depreciation trends as with the euro which is pulling the U.S. measure down recently. 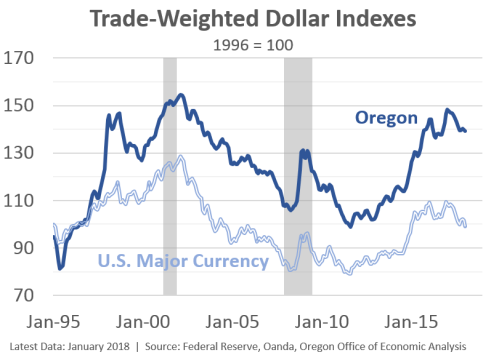 Putting all of this together shows that the Oregon manufacturing outlook remains positive. Employment has picked back up in the past year and our office’s forecast expects these gains to continue. As noted in the chart below, Oregon’s manufacturing employment today is actually pretty similar to where it stood coming out of the last severe recession in the state – the early 1980s. 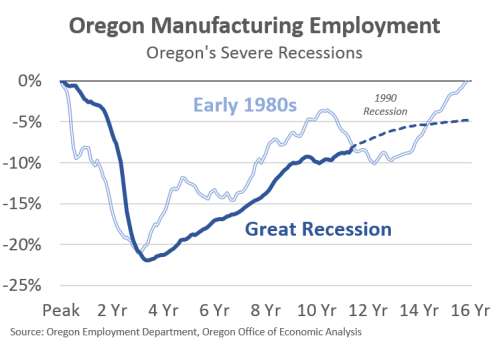